My targets for autumn 2019 are fairly simple: get a couple of decent months of training in and then attempt to eeek out PB’s over 10 miles and Half Marathon distances before I turn my focus away from the roads in 2020.

Hayling 10 has been a happy hunting ground for me previously PB wise: in 2016 when I was just starting out on my running journey I ran 75:06, and then a year later I managed to run 65:50.

“The Hayling 10 is a fast, flat 10 mile road race that winds its way around the roads at the southern tip of Hayling Island. Starting in Bacon Lane, it winds its way through West Town, turning north into West Lane for a mile or so then turns south onto the old Hayling Billy railway line for a fast 1.5 miles of well-made footpath. At around 4 miles the course returns to the roads where it heads for the water station at the Ferry Boat pub, then turns again, all the way along the sea front to Eaststoke, then back to the playing fields at Bacon Lane and the community centre for the finish and possibly your fastest 10 mile time of the year”

Training had gone pretty well in September and October: I’d hit decent and consistent mileage numbers for both months (140+); sprinkled in speedwork each week; managed to get to Parkrun much more regularly (mid-19’s turned into mid-18’s – very promisingly right on my PB); however I couldn’t quite put together a longer session consistently hitting my target 10 mile pace (6:18/mile), which was of concern.

Race day arrived and with it good weather: blue skies; single figure temperatures; and only a slight breeze. We were incredibly lucky with this given the day before it had been 70+mph winds and lashing down with rain! So no excuses for not running a decent time.

By the time I got to the community centre HQ it was about 45 minutes before the off, the main hall was teeming with runners (the race is part of the Hampshire Road Race League so was a sell-out) and there was a decent contingent of fellow Portsmouth Joggers present. Number pick-up was quick and simple. Once kitted up, there was time for a quick toilet trip, a Joggers team photo and a brief warm up.

Standing on the start-line fairly near the front, Steve (a Jogger from year’s past who’s recently returned to club) asked what my pace goals were. Simply:
a) Try to hang onto 6:17/mile average pace for as long as possible (to attempt to hit a 62:xx time)
b) If that ticked by then try to hold something close to 6:20/mile average (resulting in a 63:xx)
c) Pray that the wheels didn’t come off and I slipped over the 6:30/mile average (and no PB!)

The 9:30 start time ticked round and with a bang of a starter’s pistol the race was underway. Of course my Garmin picked that exact moment to deactivate GPS so it was a few seconds of panic before I could get it going. Steve thundered off the line and quickly gapped me, I tried to take it reasonably gently and not get carried along with the field, at that stage I’ve learnt you just need to let people go. But saying that mile one was quick (and by far my quickest mile of the race) but a 6:03 wasn’t too crazy in the grand scheme of things.

With the first mile out of the way things settled down considerably: the field had spread out; my legs were nice and warm; and it was just a case of getting into a rhythm and holding the pace. I had a little group around me from various clubs and we stuck together for the next three miles or so as we travelled first north on the road and then back south along the Billy trail with its many puddles. (6:15, 6:16, 6:23 – not too bad).

Just after getting back onto the road again I had a few moments of negativity sweep through my mind … “this is hard, why don’t you just stop?” … “you don’t really need to run a 62:xx do you?” It was a rare moment of doubt for me, and it might just have been one of those things that goes through your head when the going gets tough. However, I think it related to a blog by John Tierney I read recently which really struck a chord with me.

The blog (which I highly recommend you read) was about potentially replacing the momentary happiness running a sub-blah, blah time gives you with more structured goals which are varied in nature. It absolutely 100% applies to me right now.

Of course that being said, let’s get back to my quest for an arbitrary meaningless time goal 🤣

Miles 5 and 6 are an out and back to the Ferry Boat pub and the only water station on the course, I pushed on a little bit from the group and tried to start to pick off runners ahead. Given it’s an out and back it’s great to see club-mates and give each other shouts of encouragement, one of the lovely things about being part of a running club and honestly does give me a little lift. I saw Steve just before I reached the turn point coming back the other way, the gap between us wasn’t quite as big as I thought it might be and certainly wasn’t extending. (6:21, 6:22 – can’t hit sub-6:20, but my average pace is still clinging onto 6:17!).

Miles 7 and 8 snake back along the seafront road past the arcades, things are unsurprisingly starting to feel tough, it’s only a Parkrun to go, but a Parkrun on tiring legs. A quick shout from Donna Langley on the side-lines helps, and I’m trying to concentrate on keeping my running form strong, but I simply can’t hit sub-6:20 pace and it means any chance of sub-63 is slipping through my fingers. (6:23, 6:26)

The gel I took back at mile five is probably kicking in now and heading along the pavement towards the final turnaround point I need it as I’m struggling to hold things together. It’s been a fairly solitary run for a few miles but I am starting to be passed occasionally and I try to hang onto whoever passes even just for a few meters. I’m also having moments where my heart races and means I need to just take my foot of the gas slightly, I’ve had it before when I’ve been really pushing (Stubby 10k this year) and it’s definitely not the most fun thing to happen late in a race.

I get passed by a guy from Andover A.C. just before the turn point, I really dig in and stick on his shoulder, we’re reeling in a guy I know from Parkrun from Denmead Striders who’s a really good runner (hmmm maybe things are going better than they’re feeling). We hit the nine mile mark (6:27) and I suddenly feel a bit better, I look up the road and there’s Steve only 20 or meters ahead, I hadn’t thought about him at all since the water station turn and now I think I can probably catch him. This gives me a little boost, I push on past the Andover and Denmead runners and in hindsight I probably pushed a tiny bit too much to catch up to Steve.

I finally catch Steve at the nine & a half mile mark and sail struggle past silently, Steve gives me a friendly tap on the back and a couple of words along the lines of ‘I’ve been expecting you to show up for a while’. I’m now at the point of holding on with everything I can muster, it’s not much. The Andover and Denmead runners repass and there’s nothing I can do to react to them and a couple of others. There’s a quick couple of right turns back past where the race started, I know the finish is really close, I daren’t look behind me to see where Steve is. My watch buzzes for mile ten (6:20). I bury myself, ignoring every complaint of pain from my body and take the left turn onto the path containing the finish, try to break into some kind of sprint and just pip an Alton runner on the line.

Steve comes in a couple of seconds behind me (he’s a great runner so I’m pleased to have just got the better of him), we head through the finishing funnel, get presented with medals, grab some much needed water and a free pair of more miles socks (they’re actually fairly decent and a nice alternative to t-shirts). Then there’s a little bit of quick dissection of how our respective races have gone as a few fellow Joggers and running friends come in.

Overall I’m pleased, 90 seconds is a decent chunk to take off my PB. Saying that it was incredibly hard work, and given how hard I’d found longer race pace sections in training I’m amazed I managed to hold on in the tough miles. My pacing was okay, it was always going to be a positive split, maybe I could have gone out a bit slower but I honestly think that would have led to 64:xx instead.

I can tell my real focus is away from the roads though, the buzz a big road PB used to give me wasn’t there at the end. It was much more of goal achieved? … YES/NO … move on, which is in no way sustainable for the long term. That being said I have got Gosport Half at the weekend which is my last road race potentially for quite some time so I need to make sure I’m up for that, the fact it’s my clubs championship long race certainly adds some extra spice (engages competitive runners brain!). 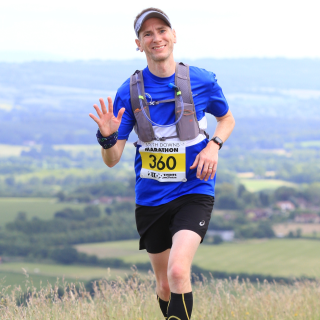